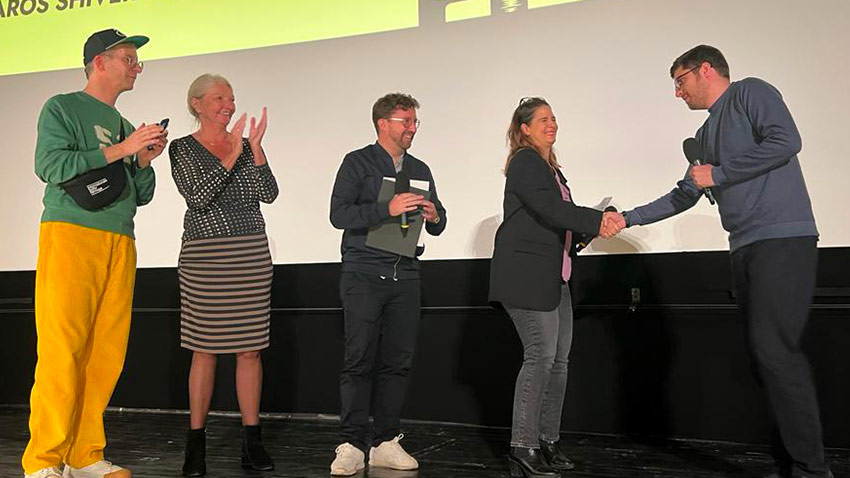 The PHAROS SHIVER SCREEN AWARD, presented for the first time at the International Hof Film Festival, goes to Iranian director Arian Vazirdaftari for his film BI ROYA - WITHOUT HER.

"In his first feature film, the director masterfully combines elements of the psychological thriller and the dark drama into a dense web of suspense and emotion. In this way, he not only sends shivers down our spines, but also evokes frightening goose bumps that you can't shake off even after leaving the cinema. Through the skilful play with reality and illusion, an atmospheric pull develops right from the start. The main character Roya stands up for her convictions but has to realise that her individual freedom of choice is only an illusion. And although she seems to have lost everything in the end, there remains a glimmer of hope not to lose herself. Her struggle for her own identity and powerlessness also subtly mirrors the social situation - which has made the film even more explosive in recent weeks. We are very much looking forward to the director's next films. Congratulations, Arian Vaziradaftari on this film and the Pharos Shriver Screen Award 2022!" is the statement of the jury, consisting of Anna Roller (director), Katharina Schöde (author) and Moritz Hemminger (The Playmaker Munich).

Arian Vazirdaftari was born in Tehran in 1988, studied industrial design and subsequently directing at the Film School in Tehran and completed his master’s degree at the Tehran University of Dramatic Arts.
He works as a writer, director and producer. After several short films, including the highly acclaimed 2016 NOT YET and 2018 LIKE A GOOD KID: MESLE BACHE ADAM, BI ROYA is his first feature length film and was immediately invited extra for the Orizzonti section.

The PHAROS SHIVER SCREEN AWARD is given to a film from the fields of thriller, horror, action and science fiction.
The prize of 2,500 euros can be awarded to an international or national short film or a first or second feature film.

The prize is supplemented by mentoring with an option for world distribution rights through The Playmaker Munich, a first look at world distribution for a feature-length film project planned afterwards, as well as co-production through Media Services and networking with potential distributors.
The award is intended to give genre film a larger stage and to promote up-and-coming and genre filmmakers.