There will be a new prize at the 56th International Hof Film Festival - the PHAROS SHIVER SCREEN AWARD! 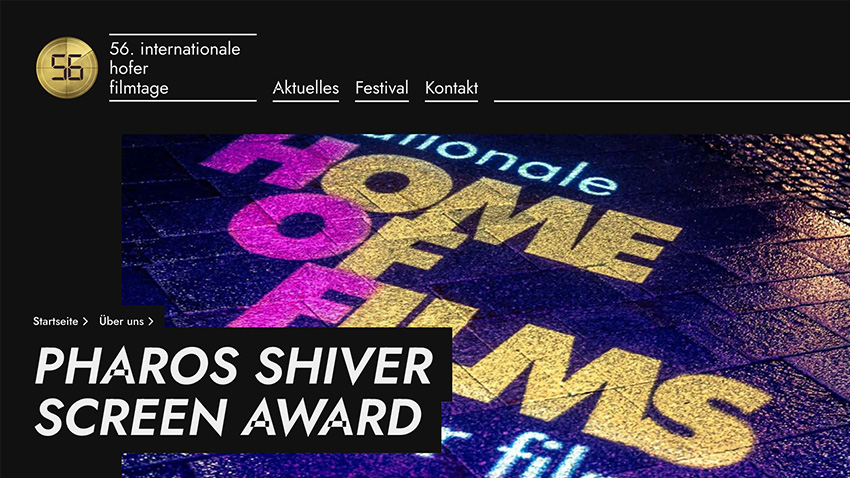 „As a leading post-production company in Germany, we at PHAROS - The Post Group are delighted to see that the next generation of national as well as international filmmakers are exploring diverse genres, increasingly including horror, fantasy, thriller, action and science fiction. With the PHAROS SHIVER SCREEN AWARD we want to set the stage for genre films. For the newly launched award, in cooperation with our world distribution unit, The Playmaker Munich, the Hof International Film Festivals offers an optimal platform, as HoF has been dedicated to genre filmmakers from all over the world for many years." Says Josef Reidinger, Managing Director PHAROS - The Post Group, in the official press release of the International Hof Film Festival.

The PHAROS SHIVER SCREEN AWARD will be presented to a film from the genres of thriller, horror, action, science fiction, etc. and is endowed with 2,500 euros. The award is international in scope and can be for a short or first or second feature-length film. The prize is supplemented by mentoring and an option for world distribution through The Playmaker Munich, a first look deal for world distribution of the director’s next feature film project, as well as co-production by Media Services unit and networking with potential distributors.

The new prize, which will be awarded from this year on and is selected by a jury consisting of three filmmakers from different fields.With the PHAROS SHIVER SCREEN AWARD as well as the other festival prizes, including the well-known "German Cinema New Talent Award", the "Hof Gold Prize of the Friedrich Baur Foundation", the "Granit - Hof Documentary Award", the "Hans Vogt Award", the "Bild Kunst Award", the "Award of the City of Hof", the "Short Film Award", and the "Audience Short Film Award of the City of Hof", a total of approximately 67,500 euros in prize money will be awarded at the festival.